NOTE: I originally wrote this post in 1996, most likely much has changed with regards to the places highlighted below.

I wanted to visit Antarctica since I was 9 years old. We read about the flight to the South Pole by Admiral Byrd in Miss Fleetwood’s 3rd grade class at IPS #53. That was when I decided to be an explorer instead of a race car driver.

Ushuaia is on the Beagle Channel and is the southern most city in the world. It is the primary embarkation port for ships heading to western Antarctica, including the Antarctic Peninsula and the Weddell Sea. Ushuaia is a city of 40,000 people and is a very active ski resort during the winter. There is snow on the mountains even in the middle of the summer (which is when I was there.) The airport is little more than an airstrip with a small hut containing an immigration desk, and there is no metal detector. Little English is spoken here, so be prepared with some basic Spanish phrases. 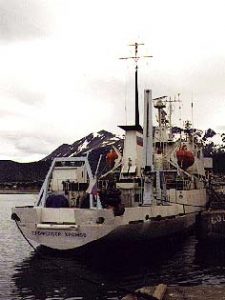 The Drake Passage is approximately 600 miles in length and takes about two days to cross depending on weather conditions. The Drake Passage is considered among the most treacherous waters in the world. However, of the nearly four days I spent in crossing it round trip, three days were “smooth” or a force 2-3 on the Beaufort wind scale.

The captain of the Professor Khromov, Captain Igor Kiselev, has over 20 years of experience sailing these waters and he said he had never seen it this calm two days in a row. The fourth day, which was the last day on the return crossing, was a force 9. There’s a good deal of wildlife to see in the passage, particularly birds. Schools of penguins porpoised by and several albatross were flying off the stern in the wake of the ship’s exhaust. Whales can also be seen, but you really need to watch for them. I mostly saw humpbacks, but we also saw a few of the toothed variety.

Deception Island is probably the most diverse and interesting place I visited in Antarctica. The island is actually a volcano. When the volcano erupted long ago it blew out a very small portion of the rim allowing sea water to flood the caldera. The narrow passage that was created is navigable by small ships. The beaches are covered in volcanic ash (black), hematite (red) and cheptonite (yellow.) 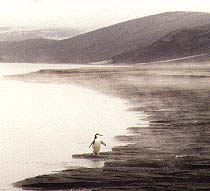 Pendulum Cove offers the visitor two distinct opportunities. The first, the remains of a Chilean research station that burned down during the last eruption. Those interested in volcanology have the chance to examine lava rocks, hematite and cheptonite. Second, you can swim at Pendulum Cove! The volcano is still active and several vents allow rising heat to warm the waters near the beach. The “beach” is actually ash. My recommendation is to have some sort of shoe on to protect the soles of your feet. The beach and water are too warm to walk on barefoot. Also, the water near the beach is too warm to sit in. Dig a shallow pool in the surf, this will allow you to regulate the warmth of the water. Cool water from the ocean side, warm water from the beach side.

The remains of an old whaling station are still visible, including the large oil drums and beached shore boats. At Whaler’s Bay you can examine the remains of a British Air Force Station that was in use during World War II. It was a strategic base whose intent was to protect the Drake Passage in case the Axis took the Panama Canal. Also, from Whaler’s Bay you can hike to Neptune’s Window. The “window” is a crescent shape along the rim of the caldera. The hike up the caldera and across to Neptune’s Window is challenging. There are very few penguins on this part of the island, but the many snow melt streams and ponds create a good setting for viewing a variety of petrels. 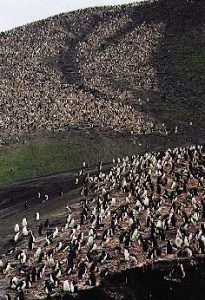 Wow!, this was the one time I wished I’d had a camcorder. There is no way I can describe the movement of the penguins here. Bailey Head is a challenging zodiac landing due to the tides, surf, rocks and limited landing area. Because of the narrow beach head, the penguins funnel down to the beach. It is an amazing sight that cannot be captured on a still photo. They appear to respect driving convention. Those going to the beach are on the left, those departing the beach are on the right. To move inland we “merged” with the general flow by walking at a penguin pace. It is estimated there are half a million penguins at Bailey Head, mostly chinstrap penguins.

This is a wonderful opportunity to observe penguins and their behaviors. I was nearly overwhelmed. Where to look next? and the noise was incredible. Penguins make a honking and a quacking sound. Penguins were nesting, vocalizing, bathing, sunning and feeding. It was fun to sit on the beach and watch them going into the water. They were going to feed on krill, which is their only source of nourishment. 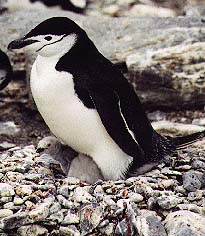 The Lemaire Channel was as far south as I went during my visit to Antarctica, approximately 65 degrees south latitude. Even in the middle of summer the channel has quite a bit of ice. We called the smaller pieces of ice “bergy bits”. As we sailed the channel the ship’s hull scrapped against these bits of ice. The resulting reverberating sound was very loud. There were often lounging seals and penguins on the larger bergy bits. As the ship drew near the penguins would flee into the water in what looked like a game of follow the leader. It was too bad that we disturbed them, but their behavior was entertaining.

We boarded the zodiacs near the head of the Neumayer Channel in order to cruise among the ice bergs and bergy bits. While cruising the channel we had the opportunity to see some of the lounging seals up close. 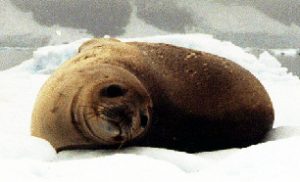 My favorite photo from the entire trip is one I took while we were on this particular excursion. It’s a crabeater seal. They don’t eat crabs, there aren’t any in Antarctica. Like most seals in Antarctica, they eat krill.

The icebergs often look blue. Icebergs are formed when ice “calves”, or falls off, from a glacier that has reached the ocean. Bergy bits are formed when ice calves from an iceberg. Air is squeezed out of the ice over the many, many years that it is part of a large glacier, partly due to the weight of the snow. The compressed nature of the ice is what causes the bergs to look bluish. The blue range of sunlight is reflected instead of absorbed. Ice bergs are like clouds, use your imagination and you can see amusing likenesses. Who says there aren’t polar bears in Antarctica?

Palmer is an active U.S. science station. The scientists there are primarily studying the depletion of the ozone layer of our atmosphere. The Palmer personnel gave us a tour of their facility. It’s not large, and houses only about 50 people. A dozen or so stay year round, most are just there in the summer. They have plenty of computing power for their scientific research, but no practical access to the internet. Since there are no phone lines or local access services and communication is done primarily using satellites, they can’t connect to the web the way the rest of us do.

There are also some scientists studying the impact of human visitors on the Adelie penguin rookery that is near the station. We visited the rookery and the penguins there do seem a little less concerned about humans than other rookeries we saw. There were several elephant seals near the rookery. The smell of the elephant seals reminded me of a dairy farm I used to live near, pee-yew!

Sledding Hill on the Antarctic Peninsula

We also stopped at an Argentinian science station, Almirante Brown, on the Antarctic Peninsula in the Bismarck Strait. They have a terrific hill behind their station that we climbed. After taking several beautiful photos, we sat down on our parkas and sledded down the hill. What fun! 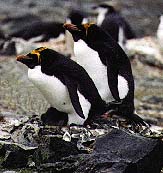 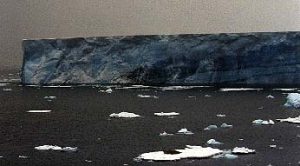 This is the place to see the giant tabular icebergs. Using the ships instruments and our own judgment we calculated the area of some of the largest bergs. The largest we saw, which the captain circumnavigated, we determined was about 1300 acres, or nearly a square mile. Because of their immense size, these bergs cannot be fully captured on film. I used a panoramic camera to photograph one. I had to be so far away to get the whole berg in the frame that it looks like a thin strip of land. We sailed for several hours among the icebergs. The snow/ice melt from the tops of the tabular bergs often caused large cascading waterfalls. We mostly saw crabeater seals sunning themselves on the bergy bits surrounding the mammoth tabular bergs, but we also saw Weddell seals. 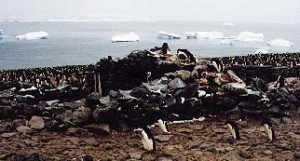 In addition to penguins, seals, birds and a crater lake, Paulet boasts the remains of a stone hut built by some stranded Swede explorers in 1903. The Nordenskjold party got trapped in the ice off of Paulet Island in the Weddell Sea during November of 1903. November is early summer, but that year the ice did not break up in the Weddell Sea. By January, the group had to abandon their ship. Nineteen men shared a 20×30, two room hut for nearly ten months before being rescued. One man did die. The rest survived on the penguins they slaughtered, stored and ate. Ninety years later, the Adelie penguins have taken over the hut and their nests are everywhere.

Penguins in the Surf

This was the most challenging zodiac landing we made during the entire trip. Point Wild is named for the navigator on the famed Shackleton expedition. Shackleton was a British explorer who, near the turn of the century, planed an expedition to cross the Antarctic continent. The plan was to have two teams, one from the eastern side and the other from the west. The entire crossing would take two years. The first year would be used to lay supply caches. The second, the eastern team, with Shackleton in charge, would make the crossing. However, both teams had problems. Shackleton’s team experienced the worst. They ran into an early winter storm and got stuck in the ice and drifted for months before finally abandoning ship. 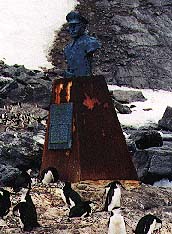 They could not make it to Paulet Island, but were able to land on the north side of Elephant Island, which has harsh storms and no beach. The 27 men stayed there under their life boats for several weeks. Shackleton then took five men and headed for King George Island, which had a whaling station. They had only a sextant and a chronometer, which had not been calibrated in over a year, with which to navigate. They made it to King George, barely. Once there they had to completely cross the as yet uncharted island to get to the whaling station.

A Chilean rescue team was assembled and the remaining 22 men on Elephant Island were rescued after living nearly five months under their life boats. A monument to honor the Chileans was erected on Elephant Island near the spot where the shipwrecked men holed up.

While visiting the monument, we observed a family of fur seals. The male was very protective of his mate and pups and we gladly kept our distance. Although, the close quarters on the island made it difficult. When the tide began to come in we had to move quickly to avoid being cut off from the zodiacs and make a safe launch. 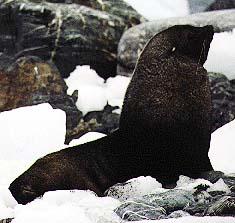 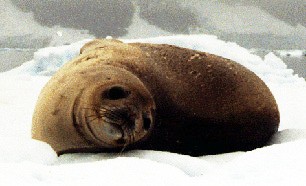