NOTE: I originally wrote this post in 1996, most likely much has changed with regards to the places highlighted below.

Several years ago I viewed a mini-series based on Neville Shute’s romantic drama ‘A Town Like Alice’. The story takes place at a variety of locales in Queensland and the Northern Territory of Australia. My sister Dorothy and I enjoyed visiting the towns and areas described in the story.

Cairns is one of the largest cities on The Great Barrier Reef and is a good jumping off point for seeing northern Queensland. From Cairns, my sister and I were able to arrange excursions for diving the reef, hiking the rain forest and wildlife viewing on the table lands. There are several tour companies in Cairns and their prices for excursions are reasonable. 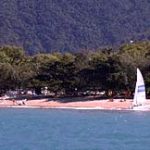 Although Cairns has no beach, there are several north of the city that can easily be reached by bus. Palm Cove on Trinity Bay is one beach I can recommend. During the summer and fall there is a problem with the box jelly fish here. However, they do put up a net to protect swimmers.

We rented an efficiency hotel room in Cairns at the Lake Central Hotel. It was very economical, close to the city center and pier and allowed us to fix many of our own meals. Fresh fish and produce is readily available. Check out the farmers market at Rusty’s Bazaar. I suggest loading up here on fresh produce if you plan to head inland, the food there is not as fresh and pretty picked over.

The Daintree Rain Forrest is just north of Cairns, about 60 miles. We stopped in Daintree village and lunched on a local reef fish, barramundi, which is similar to grouper. We took an afternoon river cruise on the Daintree River and Barrat River. We saw only two crocodiles. One was a juvenile, about 2 feet long, the other was a full grown adult of about 12 feet. They were in the river near the shore, resting in the cool shade. We mostly saw birds along the river and, of course, a variety of trees and plants. 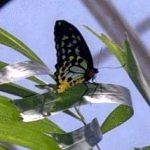 Kuranda is an aboriginal village in the Daintree Rain Forrest. It is very touristy, but still interesting and fun. We visited the local butterfly sanctuary. We walked among a large variety of butterflies, including the iridescent blue Ulysses butterfly. The Cairns bird wing butterfly is magnificent at nearly eight inches wing-tip to wing-tip. Butterflies have very short life spans and at the sanctuary the visitor has the opportunity to view the various stages of the butterfly lifecycle.

Another ‘must see’ at Kuranda is the Tjapukai (pronounced Ja-bu-guy) aboriginal dance and instrumental troop. This all male, all aboriginal group, performs traditional and original dance and music about their heritage and current lifestyle. The dance is mostly narrated and the audience learns much about the language, tools and weapons of the aborigines. The music includes performances on the didgeridoo, an aborigine instrument that is a long wooden tube that is played by continuously blowing in one end. The pitch is altered by the player changing mouth, tongue and lip shape. Continuous sound is achieved through something called circular breathing. It’s fascinating! I should mention that the Tjapukai dance troop has a very nice gift shop adjoining their theater. It has a huge variety of items decorated with aboriginal art. 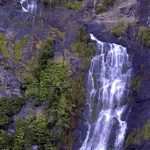 The scenic railway ride between Cairns and Kuranda is fun and offers some nice views, including two waterfalls along the Barron River. While I was there they were constructing a skyway cable car to transport tourists from Cairns to Kuranda. The cars pass above the rain forest canopy, this would probably offer the rider some wonderful views.

We did a tour with a company called AWT. It was a very small group, just us, a young Japanese couple and the guide. It was terrific. We saw a large variety of wildlife and trees and plants. The guide was very knowledgeable and entertained us with local folklore. I think the highlight was viewing a group of unadorned wallabies. These creatures are shy but easily made friends with by offering them some oatmeal. After dark, we fed peanuts to a tree possum. These nocturnal creatures have sweet faces and soft fur. They reminded me nothing of our North American opossums. I’ve long been interested in bats and was thrilled to see large groups of flying foxes. They are a variety of fruit eating bat, we saw them at twilight flying to the mango groves. 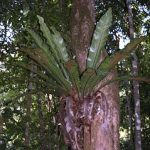 Besides these native mammals, we saw two variety of lizard, skink and tree leaf gecko, several types of birds and mound building, grass eating termites! Our guide took us to a spot to watch for platypus, but we did not see them. Among the trees and plants we saw two variety of symbiotic plants, several specimen of bird’s nest ferns and some curtain figs. 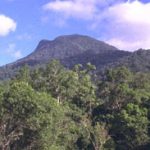 We spent an afternoon hiking Mossman’s Gorge to view the waterfalls and swim in the creek. This hike offered some beautiful scenery. Again, we viewed many specimen of bird nest fern on the trail. 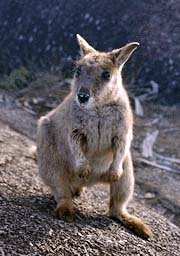 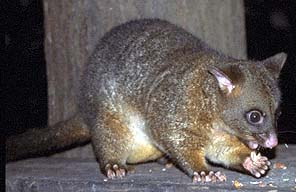 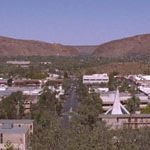 Alice Springs is a small town in the middle of Australia. It is nestled in a valley and has a very isolated feel. Alice Springs is also known as The Red Center, this is because of it’s location and the red color of the soil. It reminded me of Sedona, Arizona. The photo at left shows the Heavitree Gap in the background. We had the opportunity to observe a number of birds, including falcons and gallahs, and a wide variety of plants. I can recommend The Mediterranean restaurant at Todd Mall. They offer home made dishes, including many vegetarian selections.

We went out with a local tour company, Smarty’s, to view Standley Chasm and Simpson Gap. The hike to Standley Chasm reminded me of Oak Creek Canyon in Arizona. However, the chasm itself was very unique. You find yourself surrounded by red rock faces that reach several stories above you. It would make for terrific rock climbing, but it is not permitted. We observed black footed wallabies, a gold weaver spider, golden finches and many more plant varieties than what we saw in town. Standley Chasm is named for Ida Standley, who in 1914 came to the area to teach the aborigines.

At Simpson’s Gap we overheard an older Aussie couple ask the guide if it is similar to The Grand Canyon. The gap is unique but nothing on the scale of The Grand Canyon! It’s hard to capture the gap on film. It is a narrow gap between towering red cliffs. When you pass through the gap you get the feeling the sun has never reached the floor. Once through the gap, it opens into a large valley rimmed by red rock. 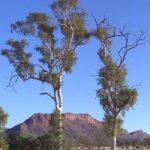 On the road between Alice Springs and the chasm and the gap, we stopped to admire two stately ghost gum trees. These trees were made famous by a local aborigine artist named Albert Namatjara. His painting of these two trees gained him international recognition. There are many fine local artists in this area. Visit the galleries and find something special to take home to commemorate your trip.

Also known by their European names Ayer’s Rock and The Olga’s, these rock formations in ‘the outback’ are just another of Australia’s many natural wonders. Uluru is a monolith of red rock. Many of the curious tourists actually climb to the top. The summit is 900 feet above sea level, the climb is about two hours round trip. The red sandstone makes the trail very slippery. There are emergency call boxes at the summit and the base, but I was told it can take 3 hours for a rescue helicopter to reach an injured person.

The aborigine’s prefer that Uluru is neither climbed upon nor photographed. Uluru is part of the aborigine creation story and as such view it as sacred. They also feel a sense of responsibility when someone is injured while climbing. I did not climb the rock, instead we hiked all the way around. This took about 4 hours. There are not many visitors here and the trails were nearly deserted. We did meet up with several aborigines
that lived nearby. 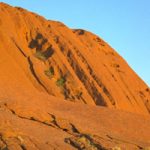 One day we participated in an aborigine led walk through the brush. Maureen and Wallace, our guides, demonstrated many aspects of aborigine life including hunting, making tools and preparing wax from the spinifex grass. The guides only spoke in their local language, Ptintjara, and were translated by the ranger that accompanied us. This walk was very informative and I can highly recommend it. And it’s free!

We stayed at the Ayer’s Rock camp. This consisted of very modern two person cabins with refrigerator, tea kettle and TV. The bathhouse is reached by going outdoors. There is a communal kitchen including a huge outdoor grill. There is a canopied eating area with bar and even a take-away window for those who don’t want to cook. We did both, it was fun and very reasonably priced. We rented a small car at the airport which allowed us to come and go as we pleased rather than waiting on the bus.

One evening we went on an outing with the astronomer from the Ayer’s Rock observatory. It is very dark here because of the absence of any nearby cities. Many interesting stellar objects could be viewed by naked eye or with small binoculars. We observed our closest neighbor, Alpha Centauri a binary star system, a star cluster called The Jewel Case, the constellation known as The Southern Cross, The Coal Sack nebula, Rigel Kentaurus globular cluster and the smaller Magellanic Cloud. The dark sky made the Milky Way simply outstanding!

The drive between Uluru and Kata Tjuta is about 50 kilometers. Kata Tjuta is a group of 36 boulders that tower several stories high, they may have once been one giant rock even larger than Uluru. There are hiking trails throughout the site. Some portions of the trails are very rocky, so watch your step. We did not see much animal life around Kata Tjuta (or Uluru for that matter) which is quite a contrast to Queensland. Although, the rangers say there are 150 variety of birds and over 20 types of mammals.

We stayed at an inexpensive walk-up hotel near Chinatown, The George. Nothing fancy, shared showers, in-room sinks, communal kitchen and sitting room. All is very clean and the owner, Harry, is very friendly. There is a very good natural food restaurant next door, Cafe Bravo. We used a bus service from the airport which provided to the door service. Being close to Chinatown, we had both Chinese and Vietnamese dinners while there. 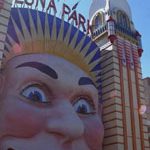 We spent one day exploring the entire city via an ‘Explorer Pass’ for the city bus. For $20A we could get on and off the bus all day long. We visited the aquarium which has a really neat tank that visitors walk under. It makes for great viewing of the captive sea life. We of course walked around the famous Sydney Opera House. We wanted to go to Luna Park, an amusement park, after seeing it on TV while in Cairns, but it was closed the day we had open. We spent several hours at the botanical garden. It’s huge and there is plenty of native and non-native species of plants to view. Also, the garden is a big attraction for birds, so the bird watching was also good. We spent a few hours exploring the old Victorian Building in downtown Sydney which is a multi-story shopping mall.

A couple notes, squash is called pumpkin, rashers are sort of a cross between bacon and Canadian bacon. Coffee is very strong because Aussies always take theirs with milk. Milk is also put in tea, but not Billy tea.